Highlights From the 2016 TTF Beginner Clinic 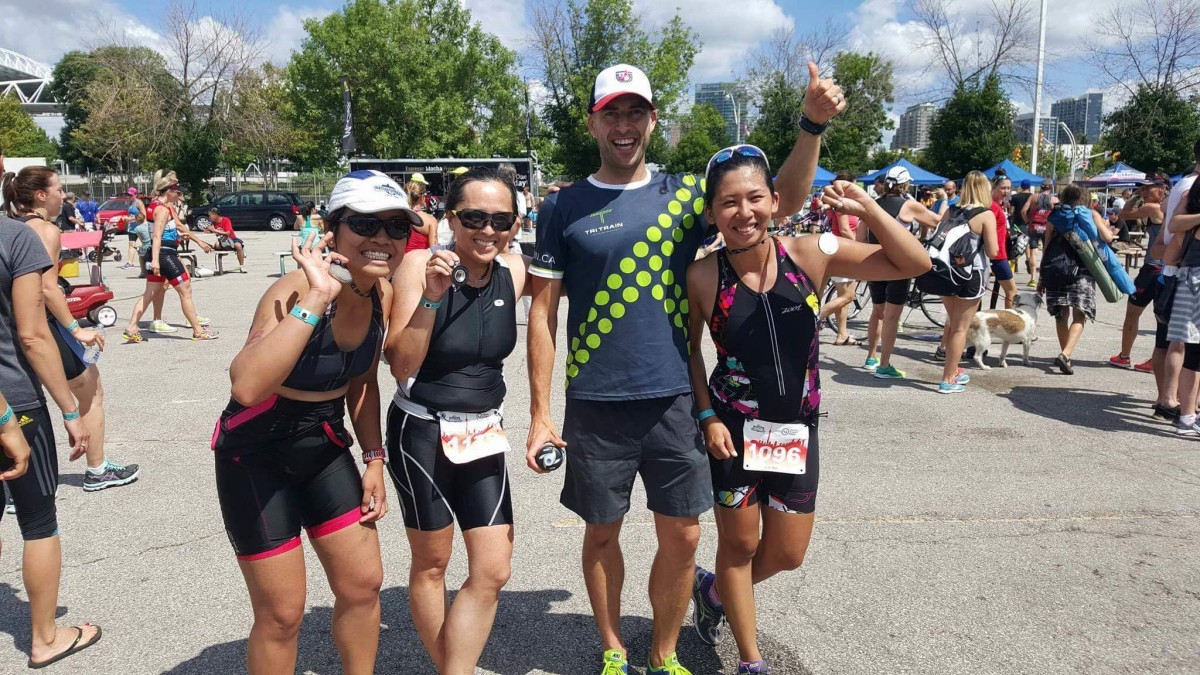 Another beginner clinic wrapped up this month with the climax taking place at the Toronto Triathlon Festival.  I’m proud to say that these beginner triathletes covered some serious ground, with many training for their first sprints and some working towards their first Olympic distances. I know this group’s triath-a-journey is not going to end there.

Here are some highlights from along the way.

As with most beginners, the majority of this year’s group came to me looking to sharpen their skills in the water.  Over the 12 weeks leading up to the TTF, we met several times in both the pool and open water.  However, this year I also added several sessions of biking, running and transitions to round out the first time triathlon experience.

One of the first things we did at our initial session in the pool was take a video of everyone’s form.  Within 60 minutes of talking about posture, everyone had already shown improvement.  Over the next several weeks we dissected the swim, examining the fundamental pillars of breathing, posture, reach, direction, propulsion, kicking and open water technique through drills and demonstrations.

I’ll never forget the session where I asked people to swim with a ball tucked under their chin to illustrate correct head position.  It was totally awkward and only one person made it across the pool without losing their ball, but the next length when they were taken away every swimmer nailed it perfectly (and I did a little victory dance on deck)!

During our last few sessions in the pool we focussed on open water skills and tactics such as drafting, turns and swim starts.  I always chuckle when when I get to be the “$h!t-disturber”, intentionally cutting in front of people, bumping, splashing and just getting all up in their kitchen to demonstrate the unexpected factors in a race environment.  But people always tell me after their race that this simulation was totally accurate and helped immensely to prepare them for when they did start to get disturbed by other racers.

Out In The Open (Water)

Next we moved outside to Cherry Beach for actual open water swimming.  I accompanied the group in my kayak to give them extra comfort knowing they would have a place to hang on to for recovery breaths in between sets (and to keep any stray swimmers from veering off to the island).  It’s really no secret, but the more you’re able to practice in open water the more comfortable it feels.  The group got so used to swimming in their wetsuits after only 3 sessions that during the last one they clocked over 1600m.  I wish I had been able to compare their form that day to the video from the pool 12 weeks prior, but I was navigating through foggy Lake Ontario at the time.

Running and Cycling Get Their Day in the Sun

Building on the 2015 clinic which was solely in the pool, I decided that better learning was to be had by adding run and cycling sessions to our itinerary.  We met at the TRI-TRAIN studio for early morning indoor sessions on bike trainers and had a handful of rides down in Sunnybrook Park ravine.  For our running work, we went down into the valley for repeat speed work and hills. Throwing some science into the mix, we met at a track in Forest Hill to video running form to view on the iPad.

The group’s efforts were put to the test with a BIG TRAINING DAY out in Milton.  Unfortunately, the reservoir did not cooperate with a healthy reading so we had to skip the open water swim, but I still encouraged everyone to suit up in their wetsuits and practice their T1 (first transition) before embarking, by bike, on the open road.  We covered a solid 30kms through the rolling and steep Niagara escarpment before finishing off with a nice trail run through Kelso to achieve that brick-legged feeling only triathletes and duathletes know so well.  It was a super hot and sunny day and even without the swim it was worthwhile getting out of the city to experience the rural roads and fresh air!

And finally the race itself.  Like a proud Papa, I watched every athlete pop out of the water and at various points along the course.  Everyone crossed the line extremely well (we had a top 10 age group finish for the sprint) and with huge smiles on their faces (even one woman in the group who unfortunately succumbed to TWO flat tires on the bike course).

And it was unanimous – all participants said to me their favourite part of the race was the swim.  As an entrepreneur who works for himself and doesn’t have a regular performance review from a superior, hearing that confirms to me that I’ve done my job well.  But it would mean nothing to me if I didn’t see the immense effort and enjoyment on the faces of the group themselves.

Great work out there gang!

Guess Who Made the Paper?

Chew On This: Being Mindful of Nutrition

Hire a Coach or Internet Poach?

Client Story: From Fear to Success